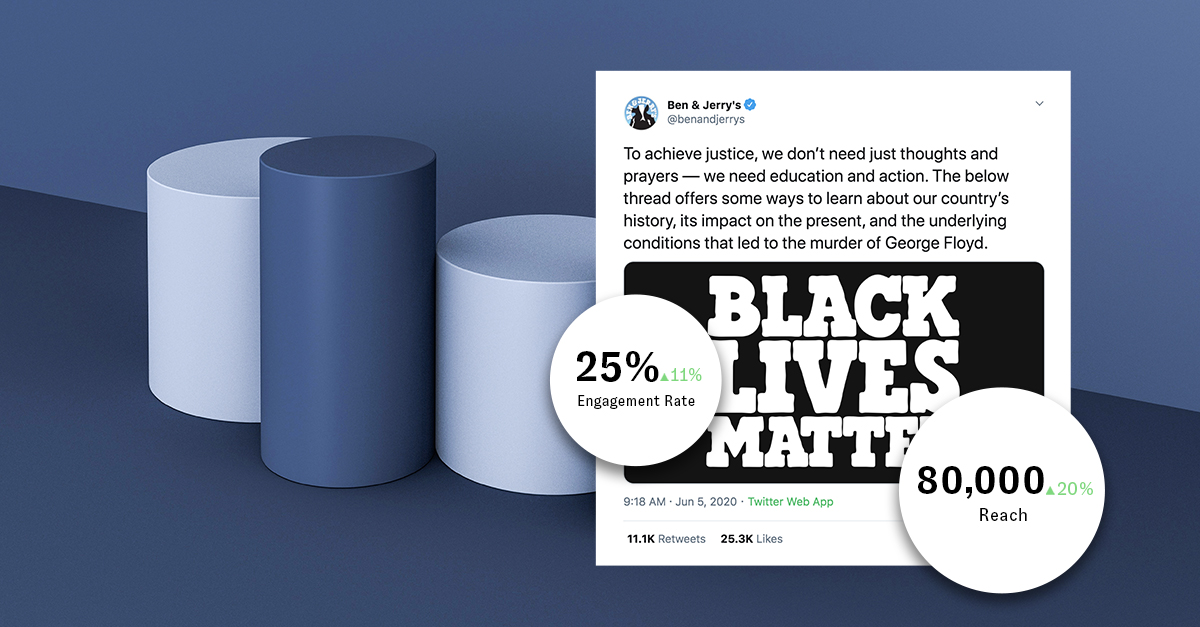 Responding in Times of Crisis: Analyzing Brands’ Statements in Response to BLM

It has become a cliche to say we’re living in unprecedented times, but it continues to be the reality of our situation as protests calling for justice for George Floyd spread across America while the Coronavirus pandemic has no end in sight. Widespread discussion on social media about George Floyd and the larger issues of police brutality, racism, and the Black Lives Matter movement has accompanied the protests, as you’ve probably noticed on both your business and personal social feeds. Almost every big-name brand or company, from Apple to Zappos, has issued a statement pledging their support to #BlackLivesMatter.

The Beginning: Blackout Tuesday and the Music Industry

How did normally-apolitical brands get caught up in this? #TheShowMustBePaused was a hashtag started by two young black women in the music industry, Jamila Thomas and Brianna Agyemang. Thomas and Agyemang called for their peers in the music industry to stop business as usual for one day and reflect on the ways that white industry executives exploit black talent. This day of reflection was set to take place on June 2, 2020.

News of the movement rapidly spread as people and brands outside of the music industry vowed to participate in a silent day of reflection as well. #TheShowMustBePaused mutated into #BlackOutTuesday, the flood of black squares that probably made its way onto your feed. #BlackOutTuesday was intended to be a day on social platforms for allies to the Black Lives Matter movement to show solidarity (represented by posting a black square) and cease posting “as normal” in order to spread information about the movement, the protests, and George Floyd.

A good idea in theory, right? But just as quickly as it appeared, #BlackOutTuesday began to draw criticism. Some people said silent reflection wasn’t enough—supporters should be donating, sharing information, and having conversations about racism with their friends and families. Additionally, activists argued, the flood of black squares appearing in the #BlackLivesMatter hashtag on Instagram was making it more difficult to share information about the movement and upcoming events.

As debates about the efficacy of different social media trends raged on, many brands made statements expressing support of the ideas behind #BlackOutTuesday—solidarity, equality, commitment to antiracism, and being better allies in the future. In response to Thomas and Agyemang, the “big three” major record labels (Warner, Sony, and Universal) all posted statements to social media declaring that they stand with the Black community and would take the day to reflect.

But their audiences still weren’t satisfied. Even high-profile celebrities like Grammy-winning musician The Weeknd called on the major labels (along with streaming giants Spotify and Apple Music) to take public actions that back up their words. The Weeknd (real name: Abel Tesfaye) posted a public message on Instagram addressed to “fellow respected industry partners and execs” urging them to “go big and public” with their donations to the community, alongside receipts for $500,000 of charitable contributions to organizations focused on racial justice.

Shortly after, Sony and Warner committed to donating $100 million each, and Universal pledged $25 million. They started to see supportive statements return from artists and fans.

This brings us back to where we are today. Almost every major brand and corporation made some form of a statement on social media, to varying receptions. In this post, we’ll analyze the public responses to different brands’ statements or actions across industries with tweets found and selected from Nuvi’s monitors—the good, the bad, and the ugly, and show you what your brand can learn from others’ successes or mistakes.

Lego’s statement started off strong. On June 3, the toy manufacturer pledged to donate $4 million to racial equality and children’s education on the topic.

The company was praised for taking an action that aligned with their statement, rather than making a statement and moving on with business as usual.

A tweet expressing positive surprise at the strength of Lego’s actions garnered 1.3 million likes and thousands of supportive comments.

But Lego’s action beyond their donation was confusing to some fans.

A memo from the Lego affiliate team was published. According to the Lego Group account, the memo was supposed to request a temporary halt to digital advertising in honor of #BlackOutTuesday and in light of the general political unrest in the US.

Unfortunately, many Lego’s fans were upset in spite of the clarification, and arguments followed in the comments.

Lego made a strong and well-received initial statement with a commitment to education. But their statement didn’t clearly outline all of the steps they were taking. An unanticipated publication of a memo intended for their advertisers caused confusion for their customers. Lego stepped in quickly to clear the air, but some customers were already upset.

Conde Nast, owned food publication Bon Appétit, was quick to speak on George Floyd’s death on social media, with an Instagram post on May 31 where they committed to featuring more black-owned restaurants, speaking out on social issues, and encouraged followers to donate to the ACLU and NAACP.

The post was generally well-received, as they spoke about the issue early on and pledged to make changes to their business to be more inclusive. But the story doesn’t stop here. Thanks to social media detectives, it quickly became apparent that this statement wasn’t in line with the values the brand had shown in the past.

Photos of Bon Appétit’s Editor in a racially insensitive costume surfaced, and the personalities featured in the channel’s popular cooking videos began to speak out on their pay gap.

Employees of Bon Appétit called for their editor to step down in response to these issues, and he eventually agreed to resign.

Bon Appétit’s initial statement actually led to more controversy for the brand, because it wasn’t in line with their actions in the past. This highlights the importance of considering all possible audience reactions before making a post and performing a thorough background check before speaking on social media.

On June 15th, Bon Appétit posted a list of things they’ve done to address racism and biases at Bon Appétit and Epicurious in place of their normal Letter from the Editor. The publication pledged to use that space to keep consumers updated on the changes they are making to both their company culture and their content to create a more equitable environment. Commenters were skeptical, as trust isn’t won back overnight, and requested more information on the specifics. They may be fighting an uphill battle, but with accountability and well-documented, concrete action, Bon Appétit may be on their way to redemption in the eyes of their audience.

So who did get it right? Popular Ice Cream brand Ben and Jerry’s has always been outspoken about social justice, so their fans knew what to expect.

And their statement delivered. The ice cream company posted a thread with several tweets, complete with educational resources and the progressive verbiage that has been incorporated into their brand.

Fans praised their direct language and pledged their continued support.

Some social media users did further research and found that the companies’ policies were in line with the same principles of social justice that their statement indicated.

Ben and Jerry’s knew their audience, anticipated their desires, and delivered a statement that met them.

So what can we learn from this moment in marketing? When making a statement on a current event or crisis, just like any other communication, you have to listen before you speak. Often, there’s no perfect statement that will make everyone happy, so it’s important to think genuinely about where your company stands on the issue at hand. Know what your audience is looking for, the history of the topic and how it aligns with your brand reputation, and what your brand has to contribute to the discussion.

Knowing how to listen before speaking can be tricky, but it’s easier when you’re strategizing with Social Customer Experience in mind. Discover how to be more in tune with your audience so you better act when called on. Download our free Social CX guide today.